When you book with an account, you will be able to track your payment status, track the confirmation and you can also rate the tour after you finished the tour.
Sign Up

Or Continue As Guest

When you book with an account, you will be able to track your payment status, track the confirmation and you can also rate the tour after you finished the tour.
Sign Up
1849

The Southern Spain By Train Tour is luxurious journey on a Vintage train in the Andalucian region of Spain. Travel on a period train with all the modern comforts. Relax in am air conditioned Grand Luxury suite with a double bed, sofa bed in the lounge and ensuite bathroom with sauna and hydromassage. You will be accompanied by a tour director and enjoy daily excursions by luxury coach to see experience Southern Spain by Train.

• Accommodation onboard in Grand Class or Deluxe Suite

• Multilingual guide throughout the tour

• Excursions and tours on a luxury coach with entrance fees included

Price Per Person in Euro

Rendezvous at Seville at 10:30 am. While the crew transfers your luggage to the train, visit the capital of Andalusia, boasting the most extensive historic city centre in Spain, home to the Gothic Cathedral, its bell tower named Giralda, the Royal Alcazar and the General Archive of the Indies. After having lunch at the hotel, we will enjoy a sightseeing tour of the city and cross the famous Plaza de España before boarding the Tren Al Andalus. Welcome cocktail onboard, presentation of the crew and accommodation in the suites. Dinner on board as we head to Jerez where we will spend the night. (D)

Just as every day, we begin today with a delicious buffet and a la carte breakfast. Then we will visit a wine cellar in Jerez. Before lunch we will enjoy the show “How the Andalusian horses dance”, famous equestrian ballet with Spanish music. Lunch in Sanlúcar de Barrameda overlooking the salt marshes of Doñana National Park and river Guadalquivir’s mouth. We will then walk around Sanlúcar de Barrameda, from where our luxury coach will take us back to Jerez de la Frontera, one of the most iconic cities of Andalusia. Back on the train and dinner onboard. Overnight in Jerez. (BLD)

Our bus will take us to Cadiz, popularly known as “Small silver cup” and considered one of the oldest cities in Europe. Tour and free time to venture on our own into the charm of Cádiz. Lunch and journey on our Tren Al Andalus heading to the stunning city of Ronda. Dinner. Overnight in Ronda. (BLD)

After breakfast, tour of Ronda and its breathtaking location, set on a plateau cut by the deep gorge Tajo de Ronda, through which river Guadalevín runs. Free time before lunch; return to the train which will head towards Granada, a city nestled on the foothills of Sierra Nevada. Dinner. Overnight in Granada. (BLD)

Spend the morning touring the Alhambra, the most visited monument in Spain, a rich palace complex that housed the Nasrid rulers from the Kingdom of Granada. This afternoon we will have free time to visit this beautiful city at our own pace. As the night falls, the whole town is wrapped in a magic spell that you will enjoy over dinner. Night in Granada. (BLD)

Morning journey on the Al Andalus to station of Linares-Baeza, from where our coach will take us to visit the Renaissance towns of Úbeda and Baeza, both listed as World Heritage Sites by UNESCO. After lunch, we will return to the train to begin our journey to Córdoba. Dinner and overnight in Córdoba. (BLD)

Cordoba is the former capital of the emirate and the medieval caliphate of Al Andalus, once the largest, most educated and opulent city in Western Europe. Back at the train to enjoy our last lunch while Tren Al Andalus takes us to our final destination, Seville, where the journey ends. (BLD) 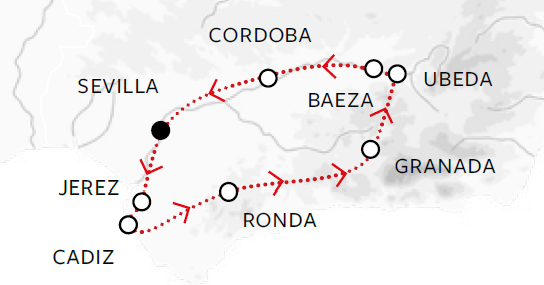