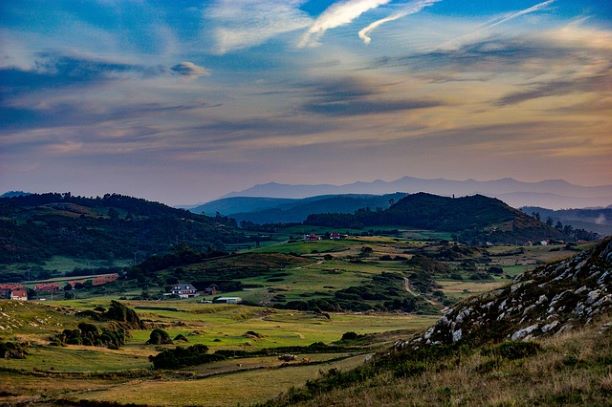 The Regions of Spain are many and varied. They have been influenced by Muslim, Jewish and Christian interests. There are iconic landmarks including the Alhambra, an ornate Moorish palace in Granada, and the Sagrada Família, Antoni Gaudí’s elaborate cathedral in Barcelona.

Savor the cuisine in Catalonia, famous for imaginative food and cafes. Feel the passion of Andalusia, the birthplace of fiery Flamenco.

Immerse yourself in Madrid and its famous art galleries. With hundreds of lively and dynamic cities filled with history, hospitable people, fine shops and excellent restaurants you will fall in love with Spain.

This is a land of culture, history, fiestas, nature areas and excellent food. In Granada, visit the Alhambra palace, the Generalife gardens and the mediaeval Albaicín neighborhood. Cordoba has its historic center with the great Mosque. Seville, the cathedral, the Alcázar palace and the Indies Archive. In Jaén, the monumental sites of Úbeda and Baeza. Experience festivals such as Easter Week, the Carnival in Cadiz, the Rocío pilgrimage in Huelva and the April Fair in Seville.

There are a variety of natural landscapes which range from the beaches of the Costa del Sol, Costa de la Luz and Almería to the extensive olive groves of Jaén. Visit the Doñana National Park (World Heritage Site) or go skiing in the Sierra Nevada ski resort.

Finally, remember that Andalusia has a thousand different flavors. Taste the sherries of Jerez (Cadiz) and Moriles (Cordoba). Try classic platters of fresh fried fish from Cadiz and Malaga. Enjoy cured ham from Huelva and Cordoba.

Aragon is a region in northeastern Spain comprising the provinces of Huesca, Zaragoza and Teruel. The Ebro River runs through the middle of this region and the Pyrenees Mountains are to the north of it.

Aragon is famous for its ornate, Moorish-influenced Mudéjar architecture. An excellent example of which is the 1686 Basilica of Nuestra Senora del Pilar in Zaragoza. Zaragoza is a commercial city with wide boulevards and interesting arcades.

Asturias is on the north coast of Spain situated between Galicia and Cantabria. The capital  of the region is Oviedo. It is known for its rugged coast, mountains, religious sites and medieval architecture.

This region in what is known as Green Spain is its spectacular scenery. This can be seen in places such as the Picos de Europa National Park, and at one of its most legendary sites: the Covadonga Lakes. Enjoy beautiful beaches in Llanes, Ribadesella, Gijón and Cudillero.

Gastronomy in Asturias is synonymous with a total dedication to the cult of good food. Cabrales cheese, the typical Asturian bean stew known as “fabada”, cider made from local apples. There are a whole host of typical dishes and products that are guaranteed to leave visitors with a delicious aftertaste.

Its cultural attractions include a range of important monuments in Oviedo and in the Kingdom of Asturias (the delightful churches of Santa María del Naranco, San Miguel de Lillo and San Julián de Prados, for example) which have been declared World Heritage sites by the UNESCO.

Also visit the various archaeological sites, caves and museums of rock art to be found throughout the area. They feature spectacular paintings and engravings dating from as long ago as 25,000 years B.C.

Boasting some of the best beaches surrounded by nature, gastronomic excellence and fine avant-garde architecture don’t miss this stunning area of Spain. Taste the ‘Pintxos’ , sample Rioja Alavesa and try the new Spanish cuisine. Visit stunning coastlines such as San Sebastian, Zarautz or Getxo and inland cities such as Vitoria and Bilbao.

Visit the Guggenheim Museum or the spectacular Vizcaya Suspension Bridge, declared a World Heritage Site by UNESCO. Add to all this this spectacular natural environment of the Basque Country that hosts the popular Camino de Santiago.

Known as Green Spain, you can enjoy natural landscapes, wonderous gastronomy and a unique artistic and architectural heritage. Cantabria is home to various prehistoric caves, including Altamira, awarded World Heritage designation and known as the “Sistine Chapel of Prehistoric Art”.

Some of the best places to visit in Cantabria lie on the famous Way of Saint James pilgrim route, and its towns and villages contain a wealth of beautiful monuments such as the Magdalena Palace in Santander, the monastery of Santo Toribio de Liébana or Gaudi’s “Capricho” monument in Comillas.

The capital is Valladolid. Salamanca is famous for its 12th-century university, Renaissance churches and baroque Plaza Mayor. Segovia’s ancient Roman aqueduct has more than 160 arches, and the hilltop Alcázar castle overlooks the city. Ávila has an 11th-century fortification wall with 82 semicircular towers.

If you are looking for monuments and artistic cities, Toledo and Cuenca are declared Cultural Heritage. On a hill embraced by the Tajo River, Toledo has hosted all civilizations that have passed through the Iberian Peninsula: romans, Visigoths, Jews, Muslims, Christians. Each one embellished it with the best of their art and culture. It is no wonder it has more than a hundred monuments.

Cuenca is the city of the Hanging houses. These amazing constructions, with balconies overlooking the Huecar Gorge, are unique as well as the museums from this city.  The Hanging Houses open their doors to the Abstract Art Museum. See a great collection of this poet, editor and artist during his bohemian life and, with pieces of Antonio Saura, a painter born in Aragón and from Cuenca at heart.

The capital is Barcelona and the Catalonia Autonomous Community is known for the beach resorts in Costa Brava and the Pyrenees Mountains. Relax on spectacular beaches in areas such as the Costa Brava. Taste its world-class gastronomy.

The works of famous artists such as Gaudí and Dalí all make this region one of Spain’s most popular destinations. Tour the buildings in Barcelona such as the Sagrada Familia Cathedral or the Palau de la Música Catalana Auditorium.

See the outstanding archaeological site at Tarraco. Wonder through the monastery of Poblet in Tarragona and the churches of the Boí valley in Lleida. All have World Heritage listing by UNESCO.

Visit world-class museums like the National Art Museum of Catalonia and the Dalí Theatre-Museum in Figueres.

If you love mountain scenery, go to the Catalan Pyrenees or to the National Park of Aigüestortes y Estany de Sant Maurici.

A region of contrasts where you’ll be able to visit exceptionally valuable historical sites. See a host of natural landscapes. Sample one of Spain’s most highly-prized cured hams. Extremadura has three UNESCO World Heritage designated sites  In Mérida, its capital, visitors should not miss exploring its archaeological site. Every summer it is the venue for a major theatre festival.

Historic Cáceres is also well worth a visit, as is the Royal Monastery of Santa María de Guadalupe in the surrounding area. Enjoy spectacular scenery, always a particular favorite with birdwatchers. Highlights include the Monfragüe National Park, the Jerte valley and the region’s characteristic wooded pastures.

A visit to the Jerte valley is highly recommended in spring. The cherry trees are in blossom and the valleys are clothed in a blanket of white. The pastures are used for grazing the pigs, which then go on to make the world-renowned cured ham from the Dehesa de Extremadura.

The capital, Santiago de Compostela, is the final destination on the Way of Saint James, the famous pilgrim route. You’ll love its landscapes full of green wooded valleys, and its amazing beaches. All along the length of its coastline, bathed by the Cantabrian Sea and the Atlantic Ocean, you’ll find areas of spectacular cliffs like those on a Costa da Morte, or the incredible Islas Atlánticas National Park.

You can visit its numerous charming villages, both on the sea and inland, and cities such as Santiago de Compostela, A Coruña, Ferrol, Lugo, Orense, Pontevedra and Vigo. You’ll marvel at its many monuments such as the Tower of Hercules or Lugo’s city walls, both designated World Heritage sites by the UNESCO.

Galicia’s delicious gastronomy is one of its strong points and features a variety of produce and traditional dishes. It also has famous wines, Ribeiro and Albariño.

La Rioja Alta is famous for being a land of exceptional wine. The towns and villages, set amid vineyards and wineries, are all almost exclusively involved in wine production.

It is also a region with a long history, and home to a stretch of the Way of Saint James, the ancient pilgrims’ route through Europe. The various castles we are going to visit are proof of its heroic past, marked by various battles and wars between nobles.

Casalarreina has sites worth visiting that include its mediaeval farmstead, with houses and noble palaces. See the early 16th-century Renaissance monastery of Nuestra Señora de la Piedad.

Santo Domingo de la Calzada, a town standing on the Way of Saint James and which was formerly the largest walled enclosure in all La Rioja. Parts of its walls and three gateways (12th-14th century) still survive. However, its most outstanding monument is the cathedral, with Romanesque origins (12th century).

The autonomous region has a capital with the same name. The city is the most visited city of Spain and it has preserved its many historic quarters.

Landmarks include the Royal Palace, the Royal Theatre with its 1850 Opera House, the Buen Retiro Park, (founded in 1631, and the National Library (founded in 1712).

Ensure to save enough time to visit the Golden Triangle of Art: Prado Museum, the Reina Sofía Museum, and the Thyssen-Bornemisza Museum. The Cibeles Palace and Fountain have become one of the monumental symbols of the bustling city. This is the most visited city of Spain for good reason.

The region is able to harmoniously combine the remnants of its farthest past, dating to the year 138 BC, with the most innovative and avant-garde buildings from the new millennium.

Valencia is trade and culture, cinema, theatre, museums, magic, business.  The city has historically been Spain’s Mediterranean port. The fine sand and clean water, the vastness of the sea and the closeness of the coastal mountains make the Valencian coast uniquely attractive.

In the north of the Valencian capital, the small tourist towns of La Pobla de Farnals, Alboraya, and El Puig have emerged where only a few years ago fruit and vegetables were grown. In addition, still within the city of Valencia, the beaches of La Malvarrosa and Levante offer a wide variety of places to dine and enjoy a quiet evening by the sea.

To the south, nature becomes predominant at Saler Beach and in the L’Albufera Nature Reserve. The beaches of Cullera, Gandía and Oliva combine beautiful landscapes with a number of sporting and recreational facilities. Interesting routes await you inland, such as the one defined by the course of the Turia River, or charming towns like Buñol, Requena and Xátiva.

If you would like to view some other tours, choose from the list: Tours From Barcelona  –  Tours From Madrid  –    Spain Tourism Authority  –  Portugal   –  Morocco  –  Grand Tours  – Short Tours